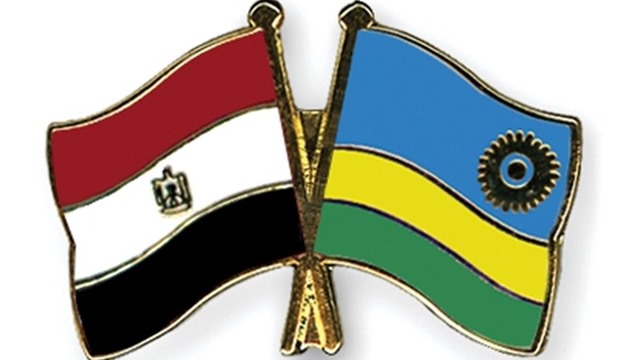 Relations between Egypt and Rwanda are particularly important for geopolitical reasons, as they are  both Nile Basin Countries. Egypt is one of the two downstream countries, while Rwanda, located on the tropical plateau, and the second source of Nile water, is one of the upstream countries.

The two countries have a number of common interests on the regional and international arenas. In addition, they are members to a number of regional organizations and gatherings including COMESA, NEPAD, African Union, and Nile Basin Initiative as both countries belong to the “Nile Basin” and are linked to the same lifeline.

Rwanda is a Nile basin country, in addition to the logistic site of Rwanda, which is considered a commercial crossing and a point of contact with its neighboring countries. Moreover, Rwanda is one of the most growing emerging countries as it is ranked seventh in the world for the most efficient and emerging governments to fight corruption and facilitate investment procedures. In this regard, 10 years ago, Rwanda introduced the electronic government system. Similarly, Rwanda is one of the African countries that pays due attention to education, where the literacy rate is more than 70%. It plans to eliminate illiteracy through the efforts of unpaid volunteers. Rwanda is one of the most successful African countries as it achieves a constant economic growth rate that ranges between 6%-9% annually since 1995, which rose to 7.5% at the end of 2015.

The January 25, 2011 and June 30 Revolutions represented Egypt’s retuning to its African depth after re-prioritizing its foreign policy in order to restore its regional role. President El-Sisi was the first president, received by the Rwandan President Paul Kagame before his official inauguration after his victory of a third term in the Rwandan presidential elections conducted last month. Besides, President El-Sisi was among the first leaders who extended best wishes to the Rwandan President after his victory.

Egyptian-Rwandan Joint Committee was established in September 1989. After that, the second round of its works was held in Cairo during the period 7-10, September, 2009 under the co-chairmanship of the Foreign Ministers of both countries. During this round, 10 documents on economic and technical cooperation, agriculture, customs, youth, industrial development, petroleum, mineral resources, education, health, scientific, technological and cultural cooperation were signed.

On 19/3/2020, Rwandan President Paul Kagame received a message from President Abdel Fattah El Sisi on the latest developments of the Grand Ethiopian Renaissance Dam (GERD)'s negotiations. The message was handed over by Foreign Minister Sameh Shoukry at a meeting with the Rwandan leader. During the meeting, Shoukry posted Kagame on Egypt's position over long years of painstaking negotiations, through which Cairo sought to reach a fair and balanced agreement that achieves the interests of the three parties concerned. Meanwhile, the Rwandan president conveyed greetings to President Sisi, expressing his gratitude for briefing him on Cairo's efforts to resolve the dam crisis. The two sides reviewed the progress witnessed by bilateral relations, which saw great momentum in several fields in the past years.

On November 4-7, 2009, Rwandan President Paul Kagame, leading a high ranking delegation visited Egypt. It is the first presidential visit on mutual level that the Rwandan president paid since 15 years. As well, he participated in the international economic conference in Sharm El-Sheikh.

On August 15, 2017, President Abdel Fattah El Sisi visited Rwanda and held talks with his Rwandan counterpart Paul Kagame in Kigali. Sisi praised the steady development of bilateral relations between the two countries, stressing the importance of working towards enhance relations at all levels. He stressed the importance of increasing the volume of trade exchange and opening channels of communication between business communities in the two countries to carry out joint projects in the fields of tourism, agriculture, energy and other fields. The two presidents discussed means of achieving economic and developmental integration between the Nile basin countries.

Rwanda participates in 55 to 70 training courses, organized by the Egyptian Agency for Partnership for Development (EAPD) in cooperation with concerned ministries and institutions, in fields like police and security, diplomacy, agriculture, irrigation, water resources management, health, information, electricity and energy.

The EAPD has sent two medical convoys to Rwanda in 2012 and 2014, as well as a number of resident Egyptian doctors to provide their expertise to Rwandan hospitals.

$64 million, while the Rwandan exports to Egypt in 2014 reached about $30 million. Widening and increasing the exchange trade has been discussed in response to the two leaders’ interest to enhance and develop the bilateral relations to meet the needs and interests of the two countries.

The most important Rwandan exports to Egypt are tea, coffee, pineapple, banana and horticulture products that are exported directly to Egypt.  Egypt’s exports to Rwanda are diverse between petroleum products, tinned foods, furniture, painting and building materials.

The business forums attract business men and give them a chance to get a closer look at the available markets and opportunities. The visit of the Rwandan businesswomen and businessmen to Sharm El Sheikh during the 2017 Africa Forum followed by a similar visit to Rwanda by a delegation of Egyptian businessmen and manufacturers.

Egypt is currently seeking, via coordination with Rwanda l, to operate a direct flight line with Cairo, in light of the strategy of linking Egypt with the largest number of African countries .

In September, 2011, A trade union delegation from Rwanda participated in the 2nd conference of the Nile Basin Countries Trade Unions Forum .

On September 22, 2015, A delegation from Transport Ministry visited Rwanda, during which they held a meeting with the Chargé d'affaires of the Rwandan Transport and Development Authority and a number of Rwandan officials to present the feasibility study for the project of linking Lake Victoria to the Mediterranean Sea, where the Rwandan side expressed great interest in linking Rwanda to Lake Victoria via Kagera River or Lake Kivu .

Cooperation in the Irrigation Field:

Egypt and Rwanda cooperate in the irrigation field, benefiting from their expertise. Egypt has always been keen to participate effectively in all irrigation projects, power generation and protect the River Nile and cleanse it in the Nile Basin countries through providing technical expertise and material aid.

Rwanda has adopted an initiative to clean and protect the Nile River in coordination with Egypt, while also interested in raising its country expertise in improving water quality and combating desertification by initiating afforestation campaigns.

On October 27, 2018, Egypt celebrated the Day of Afforestation in Rwanda by planting 201 bamboo trees, where it is a major and natural treatment for environmental pollution and carbon control.

The Rwandan Ambassador in Cairo pointed out to allocate a day each month to the Rwandan community in Egypt entitled "Amoganda" to participate with Egyptians in the cultivation and beautification of the streets to raise the slogan "Afforestation for the Nile."

For Rwanda's need for Egyptian engineering expertise to work in tunnel, electricity and dam companies,the Engineers Syndicate Chairman signed with the Rwandan Engineers Registration Office in October, 2018 a cooperation protocol to organize a training course in the electricity field, as well as inspecting many Egyptian companies in various fields and visiting national projects and tourist areas.

In 2015, the UAE Company Metitosigned an agreement with Water and Sanitation Authority to meet the needs of the Kigali, Rwanda of drinking water. The project is being implemented by Metito Egypt, the regional representative of the company in Africa.

On August 6, 2016,Rwandan Culture Minister honored Toshka Ensemble for Automatic Arts, one of the ensembles affiliated with the General Authority for Culture Palaces, Aswan Culture branch for participating in "Fespan" Pan African  Festival.

On February 11, 2018, Rwanda participated in the second week of the African Cinema Club; it is the first specialized in presenting African film in Africa, where Rwanda presentedits short film "Behind the Words" by Mari Clementine.

During the 2018 World Youth Forum, the Rwanda National Ballet participated in the artistic theater performances, which embodies the African culture of one of the seven pillars of the Egyptian character, the main theme of the forum.

On February 9-14, 2014, Egypt sent a medical convoy to the university hospital in Kigali, Rwanda. Egypt is also processing a medical center in Rwanda, its area of more than 600 meters, where it is scheduled to be supported by Egyptian doctors in various specialities, in addition to the medical supplies and modern devices.

On November 4, 2018, Youth and Sports Minister had a meeting with Rwandan Youth Minister to exchange views and coordination on activating youth relations. The meeting tackled the frameworks of cooperation between Egypt and Rwanda, implementing the mechanisms of joint programs and projects in accordance with a specific executive program aimed at benefiting from youth potentials, achieving communication among Egyptian and Rwandan youth, exchanging cultures and visions among them on various issues through the Youth Exchange Program and participating in Rwanda's Connect Africa program.

Agreements, Protocols and Memorandums of Understanding Signed by the Two Countries

The Legal framework between Egypt and Rwanda is embodied in 19 Agreements and Memorandum of Understandings signed between both countries in different fields:

- Agreement on the establishment of the Egyptian Rwandan Joint Permanent Commission, signed on 10/9/1989.

- MOU for cooperation in the agreed fields and issues of the Nile Basin Initiative signed on 16/11/1999.

- MOU on Regular Diplomatic consultations between the two Ministries of Foreign Affairs signed on 4/4/2007.

- MOU of cooperation between the Egyptian Diplomatic Institute and the Rwandan Ministry of Foreign Affairs signed on 4/4/2007.

- Agreement on Economical and Technical Cooperation signed on 10/9/2009.

- MOU of Cooperation in the field of Industrial Development signed on 10/9/2009.

- MOU of Cooperation in the field of Petroleum and Mineral resources signed on 10/9/2009.

- MOU of Scientific and Technological Cooperation signed on 10/9/2009.

- MoU on media cooperation and training of Rwandan mediamen and journalists in 2016.

- Cooperation Protocol between Cairo Chamber of Commerce and its Rwandan counterpart in 2016.

- MOU between the Egyptian Public Prosecutor and his Rwandan counterpart to enhance bilateral cooperation in fighting crime in 2017.

- MOU for judicial cooperation to enhance the knowledge of prosecutors and develop criminal justice between the two countries through the exchange of experiences in the participating legal fields in 2017.